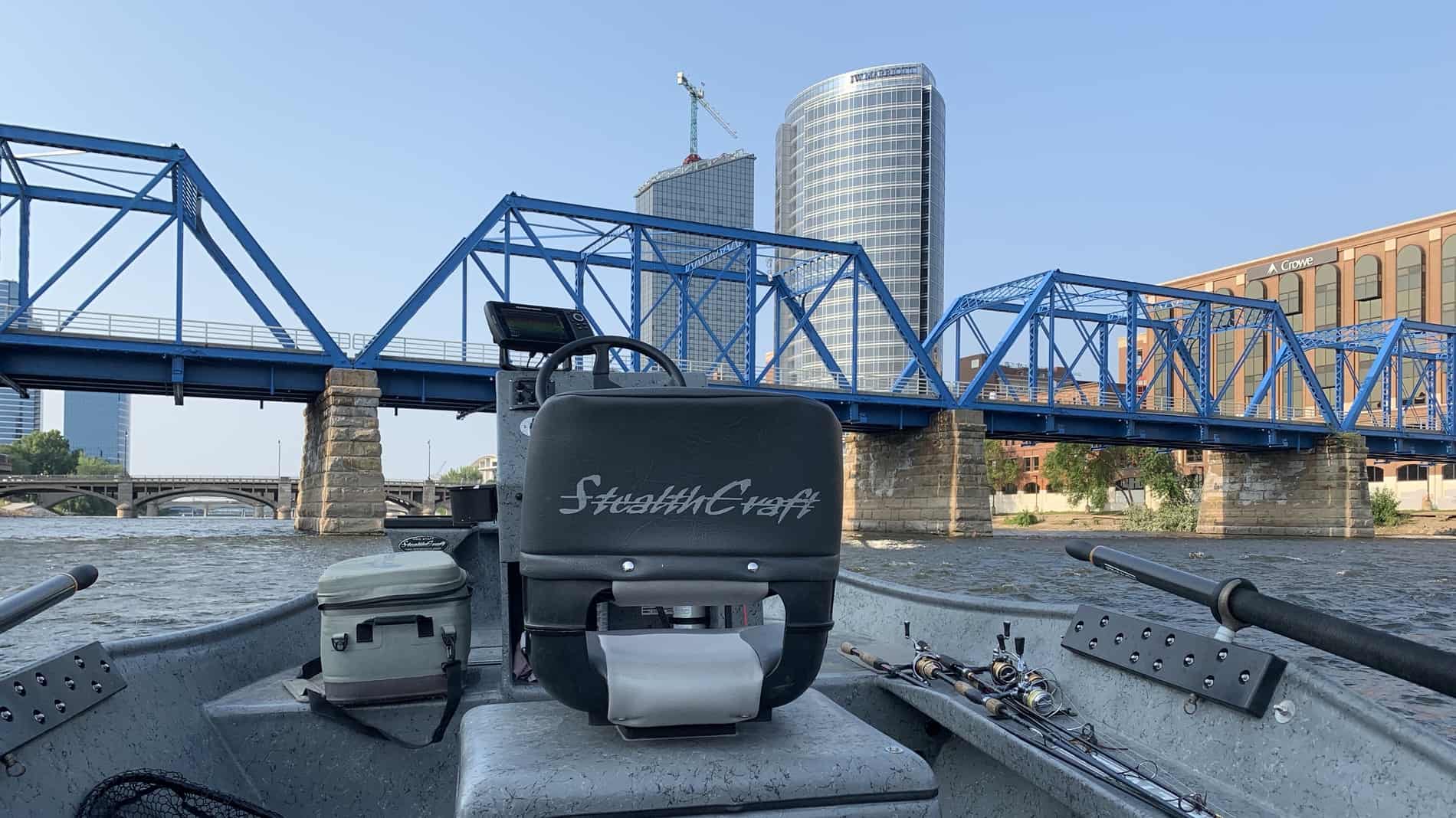 Here is our fishing report for September 7, 2019 for smallmouth bass, northern pike and salmon for the Grand River, near Grand Rapids, Michigan. We report around the first of each month on the what’s happening on the river. There is definitely a different feel in the air these days. The days are getting shorter and the nights cooler. With that said, mid month will see above average temps with above average precipitation. All good for the salmon as they start to make their way from Lake Michigan into of the Grand River and the Muskegon River.

The gage in Ada is now continues to hover around 7.25 feet, low, with the water temp in the mid 60’s. The Grand continues to be in great shape with fantastic clarity.

Despite the the cooler night temps lately, the smallmouth on the Grand River are still their summer patterns. The majority of the the bass we’ve been getting into have been found in the riffle sections of the river or holding tight to timber. The best lures continue to be spinners baits. We’ve been using Mepps size 4 with bucktails in back and red with a copper blade. If you fish the riffle sections remember the bass can be anywhere, so cast everywhere. Look to the seams and breaks behind the rocks for your best success. If you fish timber, use creature baits, rigged weedless and drop the creature smack into the wood and work the whole structure. It may take a some tries to elicit a strike, so be patient. The best color and size for creatures are the 4 inch “Bama Craw” rigged to a 3/O hook and a 1/4 bullet weight.

As far as northern pike on the Grand River is going, it has been tough. We usually get one per trip. The water temps are up so if you hook one, don’t play it, get it to the boat quickly, keep it in the water, take your hero shot and release it. This will help reduce mortality.

Coho are stating to make their way through the fish ladder at Sixth Street in Grand Rapids. We have seen a few in the Ada section but not in any numbers yet.

In about another month we see the kings in the upper section of Muskegon River near Newaygo. Although we aren’t targeting them right now, fishing reports indicate, they are slowly starting to stage in the lower Muskegon. They are big and feisty this fall, with many being caught in the 30 pound + range. If you want to hear your drag scream and feel your rod about to break then give us a call. October is primetime for these freight trains. Here are some pictures from last year in October….but you get the idea.

Fall is really the best time to fish in West Michigan. Warm days, cool nights and a variety of species are in the river at once for the angler to pursue. We still have open dates, so drop us a line and get in on all the action.